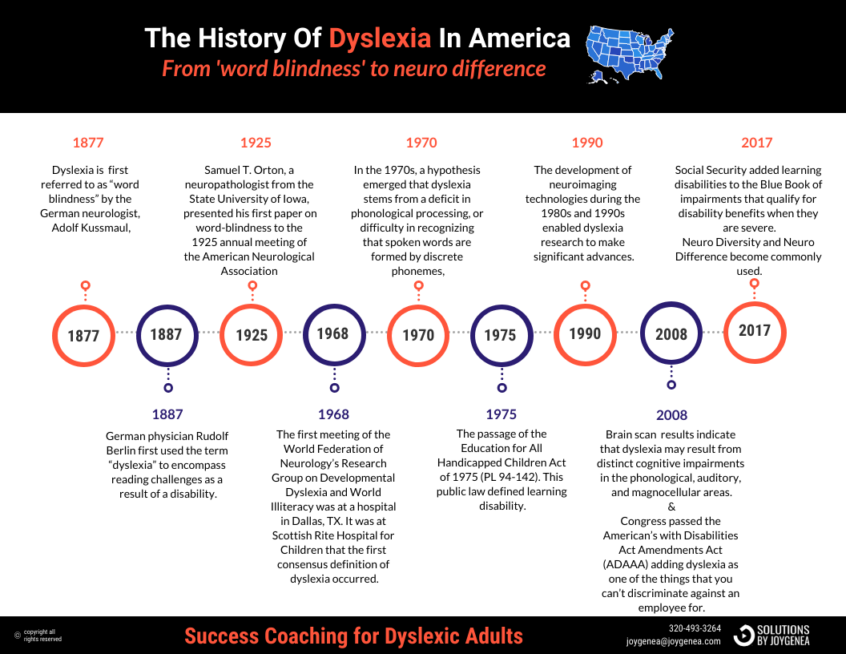 One of the most important things to keep in mind when it comes to dyslexia in adults is how little they actually know about it and how scientists/neurologists continue to learn more as technology advances.

For many of adults, when they were attending grade school, middle school or high school, the educational system knew very little and was not able to accommodate the dyslexic students needs or help them in the ways they do now.  They would have done more if they had known what to do.

The History of Dyslexia in America with Infographic

1877 – Dyslexia is first referred to as “word blindness” by the German neurologist, Adolf Kussmaul.

1887 – German physician Rudolf Berlin first used the term “dyslexia” to encompass reading challenges as a result of a disability.

1925 -Samuel T. Orton, a neuropathologist from the State University of Iowa, presented his first paper on word-blindness to the 1925 annual meeting of the American Neurological Association.

1968 – The first meeting of the World Federation of Neurology’s Research Group on Developmental Dyslexia and World Illiteracy at a hospital in Dallas, TX. It was at Scottish Rite Hospital for Children that the first consensus definition of dyslexia occurred.

1970 – In the 1970s, a hypothesis emerged that dyslexia stems from a deficit in phonological processing, or difficulty in recognizing that spoken words are formed by discrete phonemes.

1975 – The passage of the Education for All Handicapped Children Act of 1975 (PL 94-142). This public law defined learning disability.

1990’s – The development of neuroimaging technologies during the 1980s and 1990s enabled dyslexia research to make significant advances.

2008 – These results indicate that dyslexia may result from distinct cognitive impairments in the phonological, auditory, and magnocellular areas.
&
Congress passed the American’s with Disabilities Act Amendments Act (ADAAA) adding dyslexia as one of the things that you can’t discriminate against an employee for.

2017 -Social Security added learning disabilities to the Blue Book of impairments that qualify for disability benefits when they are severe.

LINK TO PDF of INFOGRAPHIC

Want to learn a little more?  Check out the history of Literacy in America and you will really understand why science even started to study us and try to figure out what was going on with our learning to read and write.  CLICK HERE

Enjoy the journey and get to know your brain,